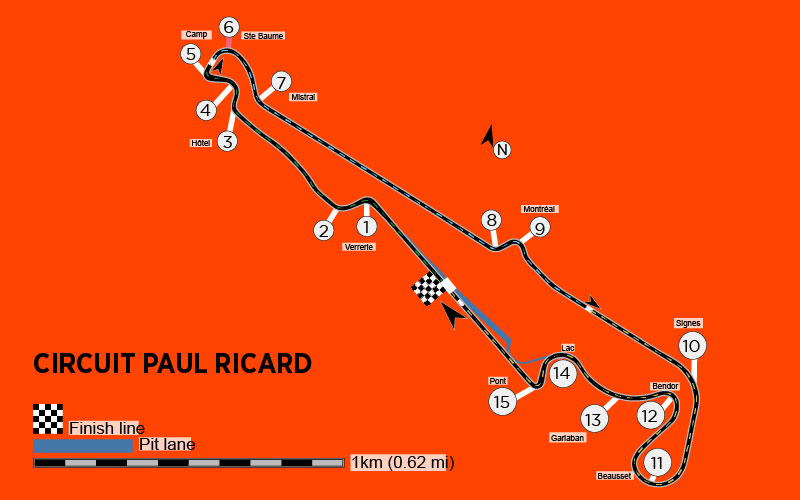 Formula 1 heads to the Circuit Paul Ricard in Le Castellet, France for round 12 of the World Championship. With 38 points separating the top 2 title contenders, this 53-lap race around the 5.842-kilometer racetrack is sure to be an exciting contest.

As it has been throughout the season, it was a fight between Redbull and Ferrari for the top of the timing sheets. Ultimately, it was Ferrari’s Charles Leclerc who set the fastest time of the session, edging out the current championship leader, Redbulls’ Max Verstappen. Carlos Sainz came third in his Ferrari.

However, it was reported that the Spaniard will be taking a 10-place grip penalty as Ferrari has replaced his F1-75s control electronics.

Several drivers had difficult starts on their first outing on French soil with the new ground effect cars. Both Lando Norris and Pierre Gasly had some mechanical issues, while Sergio Perez spun out in his Redbull. Lewis Hamilton and his old Mercedes teammate, current Alfa Romeo driver Valterri Bottas sat out FP1, with Nyck de Vries and Robert Kubica borrowing their respective seats.

Ferrari was on a roll in FP2, with their drivers taking the top two slots in the timing sheets. This time it was Carlos Sainz with the bragging rights over his teammate. The Silverstone winner set the fastest time of the session, with a 1:32.527. His Monagasque teammate Charles Leclerc was 0.101 seconds behind.

Several drivers had special helmet designs for the French GP weekend. Charles Leclerc was one of them, with his helmet adorned with a display of photographs depicting his journey from carting to the zenith of motorsports, that is Formula One.

However, FP1 wasn’t without its trouble. Hass driver Mick Schumacher spun out onto the stylish yet controversial blue and red runoff of the circuit. Luckily for the young German, he managed to save his VF-22 from hitting the barries. Micks’ teammate Kevin Magnussen also had some trouble of his own after running over the curbs of the track.

With Sainz taking a grid penalty, the Mercedes W13s receiving some upgrades, and the two title contenders on the top of their game, get ready for a thrilling 2022 French Grand Prix.

The Formula One Race 2022 schedules are posted on our Events calendar and be sure to check out for the Free Practice 3 and Qualifying summary.