The 14th round of the 2022 Formula 1 World Championship came our way from the Circuit de Spa-Francorchamps located in the Stevelot region of Belgium. With Max Verstappen, Charles Leclerc, Lando Norris, Mick Schumacher, Esteban Ocon, Valtteri Bottas, and Zhou Guanyu all starting the race from the back of the grid due to penalties, we were sure to get exciting charges through the field from a whole host of drivers. 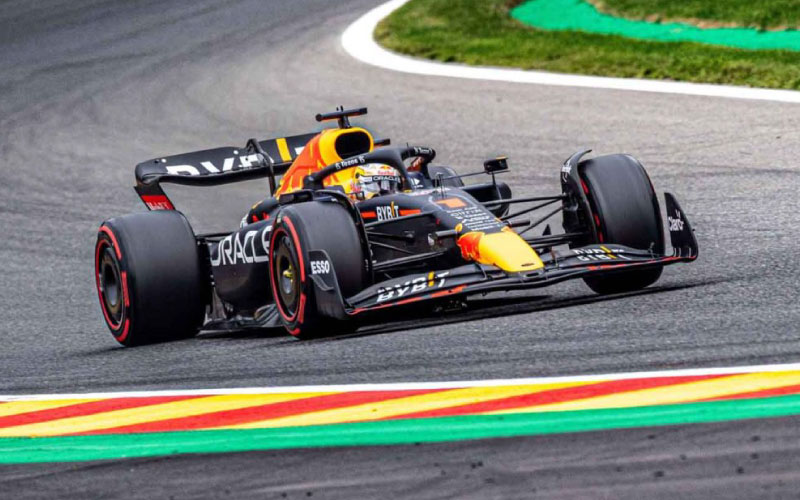 As soon as the lights went out, chaos galore. Fernando Alonso and Lewis Hamilton made contact, sending the 7-time World Champion skyward. The collision caused Hamiton to retire from the race, while Alonso carried on with minor front wing damage. Elsewhere, Nicholas Latifi lost control and spun into the path of Bottas. This caused the Finnish driver, who was also celebrating his 33rd birthday today, to get beached on the gravel trap, bringing his race to an end.

In the front, Carlos Sainz was enjoying a comfortable lead after getting a great launch off the line. The Red Bull of Perez followed him closely behind. Behind them, Leclerc and Verstappen were quickly making their way through the field. The heat of the circuit degraded the Pirelli tires fast, which forced many drivers to take early pit stops. Charles Leclerc was one of them, as a suspected puncture led the Ferrari driver to take a pitstop under the safety car and change into a set of medium compound tires.

Speaking of Verstappen, ‘Dominating’ is the one word that perfectly sums up the reigning world champions’ performance this race weekend. The Dutchmen recorded the fastest lap time in Saturday’s qualifying session, before being relegated to the back of the grid due to taking on new power unit components. This didn’t bother him as he made it to the front running packs within a few laps.

Verstappen and his Red Bull looked unstoppable, as the 24-year-old passed Sainz easily for the race lead. He never looked back until the chequered flag fell. After starting 14th, he took his 9th victory of this season, proving to everyone why he deserves to be in the top level of motorsport. Behind him was his teammate, Sergio Perez. This was Red Bull’s 21st 1-2 finish in their illustrious F1 racing history.

Carlos Sainz barely managed to fend off George Russel to claim the final podium place. His teammate Leclerc initially finished fifth, but a penalty for speeding in the pitlane saw him drop one position to Fernando Alonso. Ocon, Vettel, Gasly, and Albon were the other points scorers.

What Happens next Sunday?

With only eight rounds of the championship remaining, Verstappen and Red Bull have both the drivers and constructors championships at arms reach. However, it remains to be seen whether Ferrari and Leclerc can do anything about it.

Next weekend will host the Dutch Grand Prix, so do not forget to join us next Sunday. Until then, check out some more Formula 1 content on our website and social media pages.

Tagged #Belgian#champion#F1#formula1#FP1#FP2#FP3#Grandprixrace2022Videopost
DISCLAIMER: We know petrol heads and supercar owners get a lot of unsolicited requests, so we make sure not to send you any. We at supercars respect your privacy and will always keep your information private. Please don't feel obliged to sign up for the services we offer. If you find the information and services on this website useful and sign up for any, we will not share your information with anyone.
X